The following are real patients with real names who have given this author permission to write their stories. These are people who have learned that there is life after vision loss. These are people who want to make a difference in your life by sharing their difficulties and successes. They know what it is like to hear the line: “Sorry, new glasses won’t help.” They have been down that road and have found a way to enjoy life.

Remember Wayne? Wayne first learned that his vision was reduced to the point of being unable to renew his driver’s license during a trip to the Department of Motor Vehicles. His license was revoked and, he was, understandably, quite upset. His subsequent eye exam revealed macular degeneration. He was told, “nothing more can be done”. He could have given up hope, but he did not. He felt himself becoming depressed but fought it. He began looking for alternatives; ways he could help himself. His determination saved him. Wayne found a low vision optometrist, this author, who did a complete low vision evaluation. Using specialized eye charts, it was determined that Wayne’s vision was actually sufficient to pass the California DMV standards. Bioptic telescopic glasses were prescribed for Wayne to see street signs, road signs and traffic lights. High powered microscope glasses were prescribed for reading and near type medic work.

Wayne telephoned a few weeks later with the good news that his driver’s license was restored with some restrictions and he was able to return to his job. Wayne said: “I got my life back; I can drive to work, to the grocery store and to appointments! I feel like I’ve restored my self-esteem. Thank you so much”. A wonderful result was achieved.

Of course, Wayne had to make adjustments. Of course, it’s not like “it used to be” as most will declare. But he has made things work. He is independent. He has his freedom. He continues at his occupation as a set medic on television shows in Los Angeles. He can watch TV and see his children’s faces. At times it was tough for him to overcome his circumstances but he never gave up. There is life after vision loss. Karl Griesbaum had a similar beginning to his story. Karl was only 65 when he could not renew his Nevada driver’s license. His diabetic retinopathy had reduced his vision so slowly that he was unaware that he would fail the vision test at DMV. This was devastating news for the Nevada resident, as one of his law offices was 60 miles away in California. His freedom, independence, and livelihood were all at stake! Of course, he immediately scheduled an eye exam. Laser photocoagulation was done to prevent further damage, but the lost vision could not come back. Like most people with vision loss, he was told nothing more could be done and new glasses would not help.

Extremely discouraged, Karl sat down and cried. His wife and family were very supportive during those dark days of fear and shock. They encouraged him to research other avenues of help. Someone gave him a copy of an advertisement by this author for low vision services.

From the amount of fear and concern I heard in his voice, this low vision doctor was doubtful his driver’s license could be renewed. However, it turned out that the vision loss was mild and, with bioptic telescopic glasses, he renewed his license. He was thankful beyond words.

Twelve years have passed and Karl is now semi-retired, still driving, and has completely changed his lifestyle to lead a healthier life. With a regular exercise routine and a diet of only organic foods, he has overcome diabetes. He no longer takes diabetic medication. At his last visit six months ago, his vision actually improved. He is excited about life and the years ahead.

Lois Beshore was a very independent and busy woman producing a Christian radio show with her husband for as long as she could remember. She remembers the first time she realized she needed reading glasses when she couldn’t read the day’s schedule. From then on, every two years she needed stronger lenses. Then, at age 80, came the very upsetting news that new reading glasses would not help. She had macular degeneration.

When she was first diagnosed with macular degeneration the news was intimidating. But even though the shock she was determined to continue on and do whatever she could to make it better. More than anything she kept her faith strong and did her best to stay positive.

She spoke to multiple doctors and was finally referred to this author, a low vision optometrist. Her goals were to read the small print and continue driving. Lois was able to continue driving with the help of bioptic telescopic glasses. Reading small print was accomplished with a different pair called ClearImage microscope glasses.

Her optimism has kept her going strong and at 89 years old, she and her husband are still producing their talk show. And Lois is still driving.

Dr. William Clover has had macular degeneration for so many years that he has forgotten the struggle and the upset that the new diagnosis caused. While Dr. Clover cannot remember being told his glasses would no longer help his vision, he has had to learn how to adjust to his vision declining over time.

Dr. Clover, who graduated from medical school in 1956, was always an avid reader. As his vision began to deteriorate, he researched various blind and visually impaired organizations where he found multiple printed book alternatives, including audiobooks. He is amazed at the amount of material available in audio form.

His research led him to find many other resources offered by the various organizations available to those with vision loss. He continues to find new ways to adapt and function in the face of vision loss.

As a low vision patient of this author, Dr. Clover has been willing to try all types of low vision glasses. Some have been of great help and others, not so much. But he has learned that, for him, everything is worth a try.

He did not give up when life became tough, but rather, he talked to people with similar situations, found new doctors, and researched new ways to do things that had become more difficult with low vision. He understands that there is life after vision loss. 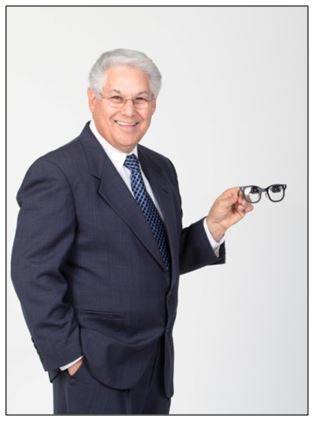 I am sorry you must deal with vision loss. It isn’t fair; life isn’t fair. Your life will be different but you will be OK. You have a challenge ahead of you but you can still have a beautiful life. Feel free to write this author on your quest for life after vision loss.

We are a group of optometrists who are specially trained in low vision to help patients suffering from: Macular Degeneration: Wet or Dry, Albinism, Glaucoma, Stargardt’s Disease, Diabetic Retinopathy, Retinitis Pigmentosa, and other Vision-Limiting Conditions